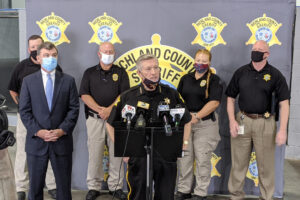 Richland County Sheriff Leon Lott and S.C. Department of Corrections Director Bryan Stirling announced Tuesday that a South Carolina inmate has been charged with ordering shootings from behind prison walls.

Director Stirling renewed calls to allow states to jam cell phone signals in prisons and for Congress to pass the Cell Phone Jamming Reform Act, after Harvester Jackson, 27, was charged with accessory to attempted murder, accessory to discharging a firearm into a dwelling and accessory to arson. Jackson is an inmate at Kirkland Correctional Institution serving a 10-year sentence for armed robbery and burglary.

“This career criminal has zero disregard for law and order,” said Sheriff Lott. “He is a menace, who continues to terrorize Richland County citizens from behind prison walls.”

Stirling has long fought for the ability to jam cell phone signals in the state’s prisons, and the bill pending in Congress would allow states to do that. The U.S. Department of Justice conducted a successful field test last year at Columbia’s Broad River Correctional Institution that showed how the signals can be blocked and not interfere with the surrounding community.

“We’ve proven that the technology works,” Stirling said. “We need the ability to stop these cell phones from working and keep these criminals from committing crimes while they are behind bars.

“Contraband cell phones have proven to be the most dangerous weapon in prisons today.” Stirling added.

Since 2015, SCDC has confiscated more than 25,000 cell phones and accessories from inside its institutions. This technology would block any cell signal from leaving institutions, rending the phones useless.

Inmates have been prosecuted for using cell phones to order murders, incite violence, orchestrate escapes, extort money from innocent victims and run criminal enterprises from inside prison walls. More than 2,600 inmates received internal disciplinary convictions for unlawful possession of a cell phone in 2018. Among those perpetrators is Jackson, who has faced at least eight disciplinary sanctions since 2014 for attempting to or possessing a cellphone while in prison.

Most recently, investigators from RCSD and SCDC’s Police Services began looking into Jackson on April 28, when a victim reported that someone had shot into her home on Percival Road shortly after 1 a.m.

The woman said it wasn’t the first time, and she implicated Jackson as the suspect. She said Jackson, whom she had previously dated, had threatened to shoot up her home if she did not provide information on a different potential victim. When she refused, he warned she would be the target instead.

Further, she accused Jackson of having destroyed her vehicle, which was found with several bullet holes and on fire in June 2019.

Also, Jackson has been tied at least two additional shootings: an Aug. 12, 2018, shooting at a home on Swandale Drive. During that incident, victims reported two of their vehicles were shot at while parked at their home. One of the victims had previously been in a relationship with Jackson.

The second incident was an Aug. 27, 2019, shooting on Humphrey Drive. During that incident, a home was shot at, and investigators obtained evidence of Jackson having threatened to do so.

The investigation revealed several phone numbers have been associated with Jackson, highlighting his disregard for prison rules. He also routinely used Facebook Messenger to communicate.

The investigation into other shootings he’s been tied to remains ongoing. Additional arrests are expected in the cases for which he was charged on July 21.